Showing posts from October, 2021
Show All

Milton’s heedlessness of his double empathy theory in critiquing PDA 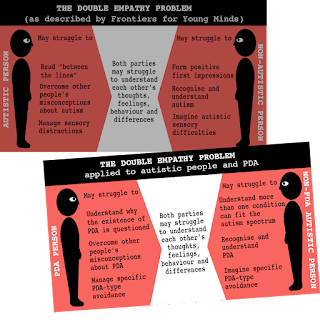 Damian Milton has become a prominent as an AA (actually autistic) autism theorist. He is celebrated by many within the autism community for his double empathy theory (more of this below), which he summarises on National Autistic Society’s website as: “Simply put, the theory of the double empathy problem suggests that when people with very different experiences of the world interact with one another, they will struggle to empathise with each other. This is likely to be exacerbated through differences in language use and comprehension.” ( Ref ) Milton, however, has gone on to attack the validity of PDA’s classification as an autism spectrum condition. He has voiced much of this criticism through Twitter, but also organised a conference whose specific goal was to discredit the validity of PDA ( ref ). He summarises the arguments given against PDA in his conference in an unpublished paper held by Kent Academic Repository: "a critique of PDA narrative and theory […] examining the PDA b
Post a Comment
Read more
More posts